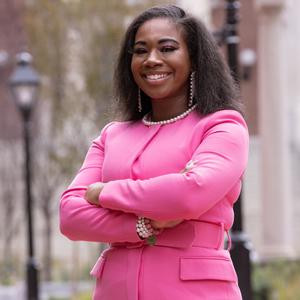 Chiquita Jackson earned her undergraduate degree in Political Science and Sociology at the Columbia College of Missouri and is currently pursuing her graduate degree in Legal Studies at the University of Baltimore. She's the founder & CEO of CJE Career Consulting, where she provides affordable professional development services to disenfranchised communities to help individuals with generational wealth. Jackson is also the youngest woman running the Maryland House of Delegates for this upcoming election year to bring impacted voices to the forefront of critical issues discussed in Maryland's State Capitol.

Chiquita continued her advocacy mission through drafting public policy recommendations with well-known organizations such as The Aspen Institute and The Leadership Conference. Her dedication to fighting for social justice has been proved by serving as the inaugural IGNITE National Detroit Fellow. She curated safe spaces for young women to learn politics and increase their involvement.

Since June 2021, Chiquita has served as a Board of Directors for Light of Africa, promoting economic access to communities in disenfranchised areas throughout Africa. In addition, in January 2022, she served as the Co-Training Director for Rising Organizers. This advocacy organization provides training and support to entry-level organizers, activists, community leaders to help create a pathway to paid organizing work.