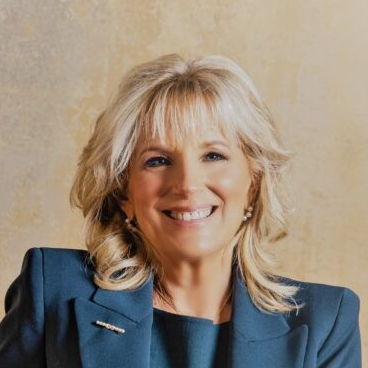 First Lady of the United States

EARLY LIFE AND CAREER
Jill Tracy Jacobs Biden was born on June 3, 1951, in Hammonton, New Jersey, to Bonny Jean Godfrey Jacobs and Donald Carl Jacobs. The oldest of five daughters, she grew up in Willow Grove, Pennsylvania, just outside of Philadelphia. She graduated from Upper Moreland High School in 1969, then graduated from the University of Delaware with a bachelor’s degree in English in 1975.

In 1976, Jill Biden began teaching English at St. Mark’s High School in Wilmington. She then became a reading specialist at Claymont High School. At that time, she was also pursuing a Master of Education with a specialty in reading from West Chester University. She completed her first master’s degree in 1981.

In 1975, she met then-Senator Joe Biden. They married at the United Nations Chapel in New York City in 1977 and she became the mother of his two sons, Beau and Hunter. Their daughter, Ashley, was born in 1981.

Jill Biden taught English at Rockford Center psychiatric hospital while also pursuing a Master of Arts in English from Villanova University. In 1993, she accepted a job at Delaware Technical Community College. In 2007, she received a Doctor of Education (Ed.D.) in educational leadership from the University of Delaware.

When Joe Biden became Vice President and the Bidens moved to Washington, DC, Dr. Biden continued her career at Northern Virginia Community College, teaching throughout their eight years in office.

SECOND LADY
As Second Lady, Dr. Biden focused on advocating for community colleges, military families, and the education of women and girls around the world.

As the Obama-Biden Administration focused on recovering from the 2008 economic recession, Dr. Biden worked to underscore the critical role of community colleges in the nation’s economy. She hosted the first-ever White House Summit on Community Colleges with President Obama and led the Community College to Career Bus Tour to highlight industry partnerships between community colleges and employers. She also became the honorary chair of the College Promise National Advisory Board, leading the effort to make community colleges free for hard-working students.

The daughter of a Navy Signalman and the mother of Major Beau Biden, a soldier in the Delaware Army National Guard, Dr. Biden has been a longtime advocate for military families. As Second Lady, she launched Joining Forces with First Lady Michelle Obama, an initiative to support service members, veterans, their families, caregivers, and survivors. She also released a children’s book in 2012, Don’t Forget, God Bless Our Troops, the story of their family’s experience with deployment through the eyes of Dr. Biden’s granddaughter, Natalie, in the year her father, Beau, was deployed to Iraq.

Dr. Biden’s advocacy for more cancer education and prevention began in 1993, when four of her friends were diagnosed with breast cancer. Following that year, she launched the Biden Breast Health Initiative to educate Delaware high school girls about the importance of early detection. After Dr. Biden and then-Vice President Joe Biden lost their son Beau to brain cancer in 2015, they helped push for a national commitment to ending cancer as we know it through the White House Cancer Moonshot.

Her New York Times bestselling memoir, Where the Light Enters: Building a Family, Discovering Myself was published in 2019. That was followed by her second children’s book, JOEY: The Story of Joe Biden, which was published in 2020.

FIRST LADY
As First Lady, Dr. Biden continues her work for education, military families, and fighting cancer. She is a professor of writing at Northern Virginia Community College.

Connected in Class: A Starting Point & Close Up

Connected in Class: A Starting Point & Close Up