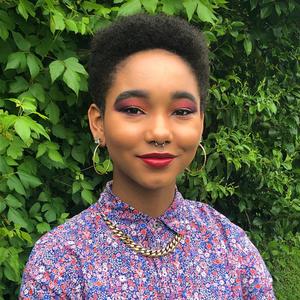 Student activist Elle Smith (they/them) is a black, queer, non-binary student who is dedicating their life to using their voice to generate positive social change. They entered high school searching for a community of people like them: people who were passionate about learning, growing, and making the world a better place. This quest led them to revive their school's dormant GSA, and they've led the group ever since. Elle has organized an annual Day of Silence, developed and delivered multiple LGBTQ+ inclusion trainings for staff, and advocated for safe spaces. With the hope of increasing the impact of GSAs in the Austin area, Elle founded a non-profit, the Central Texas GSA Coalition in January of 2019. Since then, the Coalition has attracted over 100 members from more than 20 schools (including charter and and homeschool students who may not otherwise have access to the life-saving impact of GSAs).

Elle, has won several essay contests for LGBTQ+ advocacy, and they are a published contributor to Trans+: Love, Sex, Romance, and Being You by Kathryn Gonzales and Karen Rayne. They are also GLSEN’s 2019-2020 Student Advocate of the Year, a title that has granted them a platform to connect and engage with a nationwide network of changemakers. When they are not advocating for LGBTQ-inclusive policies or altering costumes for a show, you can find them reading philosophy, playing classical guitar, taking pictures for Instagram, or sewing clothes.