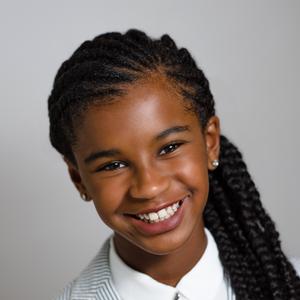 Marley Dias, is the precocious and purpose-driven 13-year-old founder of #1000BlackGirlBooks, author of Marley Dias Gets It Done: And So Can You! whose successful campaign has garnered over 6 billion media impressions. #1000BlackGirlBooks, is an international movement to collect and donate children’s books that feature Black girls as the lead character. Marley launched the #1000BlackGirlBooks drive in November of 2015, leveraging the power of social media to reach a larger audience. The goal was to collect 1,000 books featuring Black female protagonists by February 2016. The story went viral and was picked up by media outlets around the world as well as bloggers, schools, youth-focused organizations and millions of individuals who wanted to participate in the project. Marley has collected over 11,000 books to-date. Marley has spoken at the White House's United State of Women alongside Michelle Obama and Oprah, The Forbes Women's Summit, United Nation's Girl Up, Inbound, CEO Action for Diversity and Inclusion, the Social Innovation Summit and several others.

In light of the campaign’s huge success, Marley has appeared on Ellen, CBS This Morning, The Today Show and The View. In her Editor in Residency at ELLE, Marley has interviewed Ava DuVernay, Misty Copeland and Hillary Clinton for Elle.com. She has been featured in a Microsoft Commercial, Chrome Commercial and a Disney World Resorts digital campaign. Marley has spoken to corporations such as Tapestry, Perdue Farms, and Deloitte. Marley is the youngest member of the Forbes 30 under 30 list for 2018. Marley resides in West Orange, NJ with her mother and father.