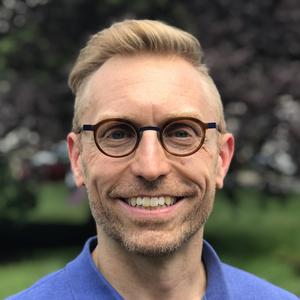 Joe Salvatore is a Clinical Associate Professor of Educational Theatre at NYU Steinhardt where he teaches courses in ethnodrama, ethnoacting, applied theatre, and new play development. He also directs Steinhardt’s Verbatim Performance Lab, whose investigations analyze and perform words and gestures collected from found media artifacts and first-person interviews in order to disrupt assumptions, biases, and intolerances across a spectrum of political, cultural, and social experiences. Recent Lab projects include The Kavanaugh Files, The Grab ‘Em Tapes, The Lauer / Conway Flip, The Moore / Jones Challenge, No(body) but nobody, and Of a Certain Age.

In 2017, Joe collaborated with economist Maria Guadalupe (INSEAD-France) to create Her Opponent, a verbatim re-staging of excerpts of the 2016 presidential debates with gender-reversed casting. The Off Broadway production of the project was nominated for an Off Broadway Alliance Award for Best Unique Theatrical Experience and has been covered by various news outlets including NPR’s The Takeaway, MSNBC, The New York Times, The Guardian, The Hollywood Reporter, Breitbart, Fox News, and ABC News.

Joe has taught master classes and created original verbatim documentary theatre projects with teachers and students at the Academy for Software Engineering, the United Nations International School, The Chapin School, the Institute for Collaborative Education, and Young Women’s Leadership School of Astoria, all in New York City. His current school-based collaborations include Boxed Out, a script exploring gender and gender stereotypes with students at Bentley School in Lafayette, California, and a new script exploring why people choose to take action with students at The Chapin School. He has presented about his verbatim performance work at MIT’s Sloan School of Management, Yale University School of Management’s Education Leadership Conference, the University of Massachusetts, and Tallaght Community Arts in Dublin, Ireland.