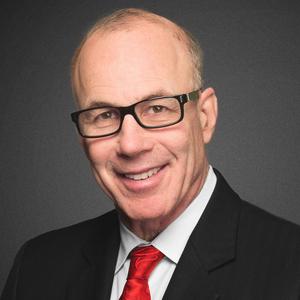 DR. STEPHEN KLASKO IS A TRANSFORMATIVE LEADER who uniquely combines creativity and passion with strategic thinking to articulate and implement disruptive ideas for the future.
As President and CEO of Philadelphia-based Thomas Jefferson University and Jefferson Health since 2013, he has steered one of the nation’s fastest growing academic health institutions based on his vision of re-imagining health care and higher education. In addition, his 2017 merger of Thomas Jefferson University with Philadelphia University creates a pre-eminent professional university that includes top-20 programs in fashion and design.
His track record of success at creating and implementing programs that are shaping the future of health care earned him a place on Modern Healthcare’s list of the “100 Most Influential People in Healthcare” and “Most Influential Physician Executives”
in 2017. That same year, his entrepreneurial leadership and success at recruiting helped Thomas Jefferson University Hospital achieve a #16 ranking – and elite Honor Roll status – on U.S.News & World Report’s Best Hospitals list.
Dr. Klasko is a nationally recognized advocate for healthcare
transformation, having served as dean of two medical colleges, and leader of three academic health centers before becoming President and CEO at Jefferson. He is author of 1999’s The Phantom Stethoscope, 2016’s We Can Fix Healthcare in America, and editor in chief of the journal “Healthcare Transformation.” His forthcoming 2018 book is titled, Bless This Mess: A Pictorial Primer for the Future of Healthcare.
Under his leadership, Jefferson Health has grown from a three hospital urban academic medical center with annual revenues of $1.8 billion to a major regional academic medical center with more than $5 billion in annualized revenues. Jefferson Health has become a 13-hospital system with partnership mergers that include Abington Health, Aria Health and Kennedy Health. Jefferson has the largest faculty based tele-health network in the country, the NCI-designated Sidney Kimmel Cancer Center, and an outpatient footprint that is among the most technologically advanced in the region.
This rapid growth led in 2017 to GE Healthcare signing with Jefferson Health the largest risk-shared partnership in the U.S. – aimed at saving more than $500 million over eight years.
Jefferson has 2018 annualized revenues of $5.1 billion, more than 30,000 employees, 7,800 students, 6,400 physicians/practitioners and 4,400 faculty.
Through a unique four pillar model, academic-clinical-innovation-philanthropy, Jefferson has attracted venture capital and transformational gifts. Sidney and Caroline Kimmel donated $110 million to Jefferson on June 18, 2014, the largest gift in the University’s history. Philanthropy and innovation have also resulted in the addition of the Marcus Institute, nationally recognized for its modern medical and integrated therapies.
Previously, as CEO of USF Health and Dean of the Morsani College of Medicine at the University of South Florida, Dr. Klasko built the nation’s largest “assessment of technical and teamwork competence” center known as CAMLS (Center for Advanced Medical Learning and Simulation). He also led a partnership with the country’s largest retirement community, The Villages, to create “America’s healthiest hometown,” an innovative primary-care-driven, patient-centric, Medicare-based accountable care model.
Dr. Klasko is ideally suited to lead such initiatives, having completed a grant after receiving his MBA from the Wharton School of Business of the University of Pennsylvania on selecting and educating physicians to be leaders of change. His unique educational program at USF, called SELECT (Scholarly Excellence, Leadership Education, Collaborative Training), is recognized for its focus on choosing medical students based on emotional intelligence and leadership potential.
Dr. Klasko also serves on the board of Teleflex (TFX), a NYSE global medical device company with a market cap of $12 billion. He has served on both the audit committee and governance committee and has been a director since 2008. He also is a trustee of Lehigh University, one of the nation’s leading engineering and business schools.
He is married to Colleen Wyse, a fashion leader and founder of The Philadelphia Trunk Show, and has three children: Lynne, David and Jill.