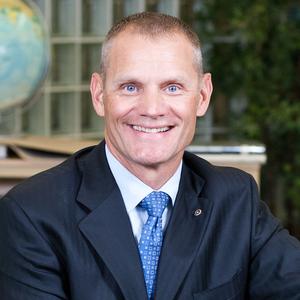 Dr. Steven T. Webb became superintendent of Vancouver Public Schools in July 2008. He joined the district as deputy superintendent in 2006.
Webb has a distinguished 33-year career in public education, serving in Washington and California as a superintendent, deputy superintendent, assistant superintendent for secondary learning and technology, principal and assistant principal, high school teacher and coach. He is the 2017-18 president of the Washington Association of School Administrators.
Webb was named the 2016 Washington State Superintendent of the Year and was one of four finalists for the National Superintendent of the Year. Also in 2016, Webb was named a Leader to Learn From by Education Week, and he received the Community Schools Superintendent Leadership Award from the Coalition for Community Schools, the Institute for Educational Leadership and the American Association of School Administrators (AASA). In addition, the Education Research and Development Institute presented Webb with the 2016 Mike Kneale Educational Excellence in Leadership Award. In 2015, Webb was selected for the Horace Mann League Ambassador Award and was named a Future Ready Leader by the U.S. Department of Education. In 2014, he was one of eight public school leaders in the nation selected by eSchool News as a Tech-Savvy Superintendent. In 2011, he was honored, along with his colleague, Tom Hagley, with the Leadership Through Communication Award given by AASA, the National School Public Relations Association and Blackboard Connect. Webb also received the 2011 Robert J. Handy Most Effective Administrator Award from the Washington Association of School Administrators.
A native of Washington State, Webb grew up in Tacoma and graduated from Bethel High School. He earned an educational doctorate from Seattle University, a Master of Arts degree in teaching from Lewis and Clark College, and a Bachelor of Arts degree in politics and government from the University of Puget Sound.