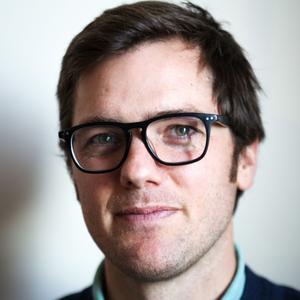 Telling Room Creative Director Andrew Griswold taught middle and high school English in Maine, California, and Washington, DC schools before joining the nonprofit world in 2008. He graduated from Davidson College and earned an MA from Middlebury College's Bread Loaf School of English. Since joining The Telling Room, Andrew has helped grow their reputation as a national arts education leader, earning press coverage from the Washington Post, Huffington Post, New Yorker, Fast Company, and many others. In 2015, The Telling Room received a National Arts and Humanities Youth Program Award from the White House, the highest honor in the creative youth development field.

Andrew is also a book designer and editor. He has designed nearly 150 books and chapbooks for Telling Room programs, including a number that won honors from the Maine Literary Awards and the Scholastic Arts and Writing Awards. He lives in Yarmouth, Maine with his wife and two young sons.

Youth Publishing: How to Energize Emerging Writers at Austin Convention Center Room 19B

Youth Publishing: How to Energize Emerging Writers at Austin Convention Center Room 19B