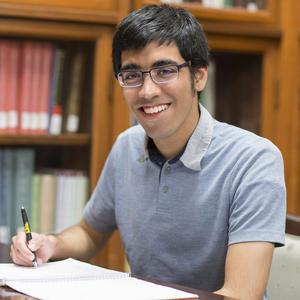 Zaakir Tameez is a Posse Scholar at the University of Virginia who hails from Houston, Texas. In high school, he founded the Houston ISD Student Congress. Since his graduation, the 100% student-run, student-led organization continues to grow, dealing with issues ranging from student mental health to school lunch food, and representing the 215,000 students of the district. In the summer of 2015, he coordinated a team of ten students to submit a historic student-written amicus curiae brief to the Texas Supreme Court for a school finance inequality lawsuit, garnering national media attention and recognition from the Court. Now studying in Virginia, he collects and analyzes student input on behalf of the Albemarle Country Public Schools system and serves on one of their community advisory boards. He assisted with their $10 million grant proposal for the Project XQ Competition on the future of high school, becoming an XQ Finalist. Tameez was featured in the Houston Chronicle's "Houston's 40 Most Fascinating People of 2015" list, and has been interviewed for several news outlets including the Washington Post, the Austin-American Statesman, UVA Today, and NPR’s “Here and Now” show.