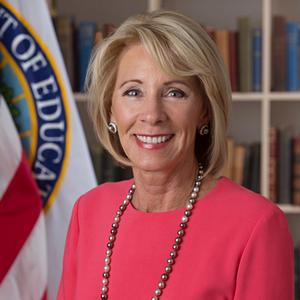 US Department of Education

Betsy DeVos serves as the 11th U.S. secretary of education. She was confirmed by the U.S. Senate on February 7, 2017 after being nominated by President Donald J. Trump.

Secretary DeVos has been involved in education policy for nearly three decades as an advocate for children and a voice for parents. She is especially passionate about reforms that help underserved children gain access to a quality education.

DeVos' interest in education was sparked at an early age by her mother, a public school teacher. It grew when she sent her own children to school and was confronted with the reality that not every child in America is granted an equal opportunity to receive a great education. DeVos saw firsthand the work leaders in her hometown were doing to increase educational opportunities for students and choices for parents, and she has been involved in the fight to provide better educational options across the nation ever since.

For 15 years, DeVos served as an in-school mentor for at-risk children in the Grand Rapids (Michigan) Public Schools. Her interactions there with students, families and teachers, according to DeVos, "changed my life and my perspective about education forever."

A leader in the movement to empower parents, DeVos has worked to support the creation of new educational choices for students in 25 states and the District of Columbia.

As secretary, DeVos will work with President Trump to advance equal opportunities for quality education for all students. DeVos firmly believes that neither the ZIP code in which a child lives nor a child's household income should be the principal determinant of his or her opportunity to receive a world-class education. As secretary, she will advocate for returning control of education to states and localities, giving parents greater power to choose the educational settings that are best for their children and ensuring that higher education puts students on the path to successful careers.

Prior to her confirmation, DeVos served as chairman of The Windquest Group, an enterprise and investment management firm. In addition to her leadership in the education arena, DeVos has also served on the boards of numerous national and local charitable and civic organizations, including the Kennedy Center for the Performing Arts, Kids Hope USA, ArtPrize, Mars Hill Bible Church and the Kendall College of Art and Design.

DeVos is a graduate of Calvin College in Grand Rapids, Michigan, where she earned a Bachelor of Arts degree. She is married to entrepreneur, philanthropist and community activist Dick DeVos, and together they have four children and six grandchildren.